How To Store Bell Peppers in the Fridge?: Are you Chinese lovers? Do you eat bell peppers usually? This is the right page to look at the storage tips to prevent your bell peppers from spoilage. Here is the information about How to store bell pepper along with additional data like how long it can be good, how to tell if bell peppers go bad, and what are the best ways to pick the right bell peppers from the supermarket or farmers market. How To Store Bell Peppers in the Fridge

Always bell papers need to be stored in the fridge to keep them fresh for a long time. If you are going to cook them right away then you can leave them at room temperature in the pantry for one or two days. Whole bell papers are placed in the crisper drawer in the refrigerator using the resealable bag.

When it comes to cutting bell peppers, you should store them in airtight containers in the fridge or else follow the paper towel tip explained in the below module. If bell peppers are cooked and left after your lunch or dinner time then store leftovers in the airtight box or bowl with a lid in the refrigerator.

See some of the important Bell Peppers storage tips and prevent them from spoilage:

How To Store Cut Bell Peppers?

The storing of chopped bell peppers properly is a must to avoid losing the water much faster. The left water stays at the bottom of the box and tends to spoil other pieces’ quality in seconds.

To cut it down, take a paper towel in the container which absorbs the excess water and prevents the peppers from getting slimy too fast and trim the storage time. If you follow this trick then your bell peppers last for more than 2 or 3 days.

If you want to repeat the process again for keeping the cut bell peppers then take off the moist paper towel and dry it to reuse for the next sets upto a couple of times. 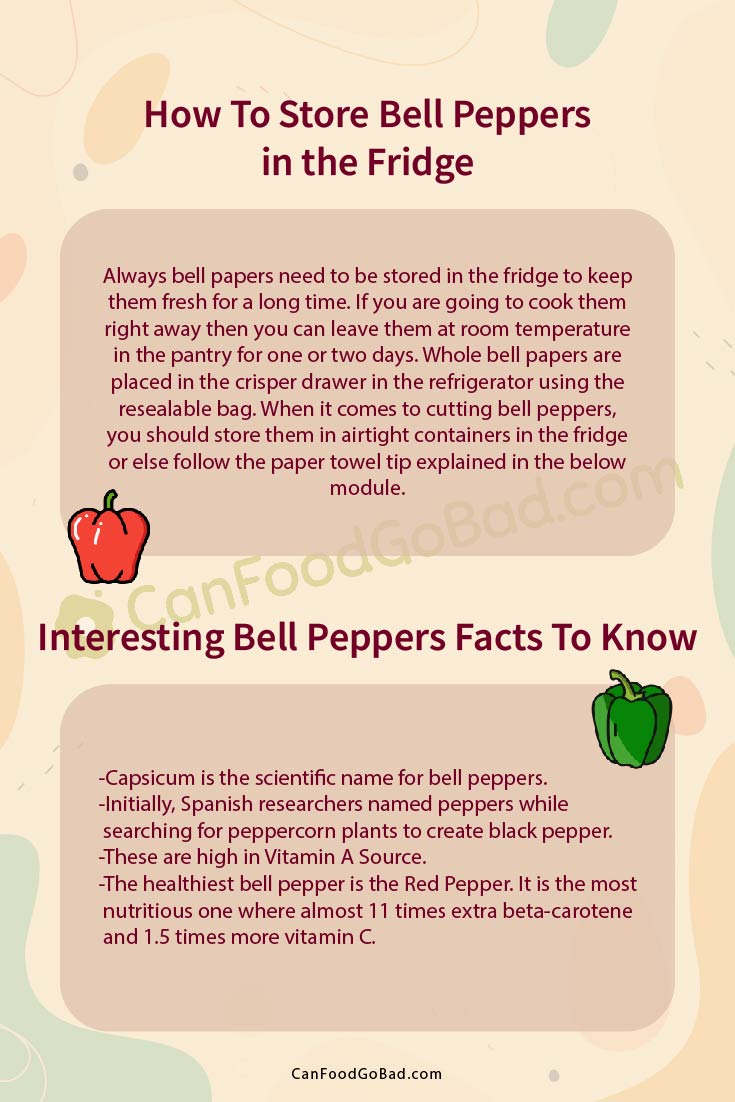 Do Whole Bell Peppers Need To Be Refrigerated?

When we go technically, storing the bell peppers in the refrigerator is not required. Did you see any of the sellers in the vegetable market selling cold bell peppers? Not right! Hence, bell pepper can’t go bad at room temperature for one day or two days on the kitchen counter. Later on, you have to store them in the fridge for freshness & good quality.

However, cold storage is the best way to store bell peppers for a longer time. The temperature to store any type of bell pepper is 45°F (7.5°C) nearly, which is lower than the room temperature and slightly higher than in an average refrigerator. The cut bell peppers should always store in the refrigerator to maintain good quality for a couple of days.

How Long Do Bell Peppers Last?

Bell Peppers’s storage time for each variety is explained in the following table. Take a look at the information shared in the table and then continue your read for extra data on the shelf life of bell peppers.

It doesn’t matter red or yellow or green or orange-colored bell pepper, almost the storage life remains the same. If you want to go with my precise assessment then the time it can last is about two weeks and it’s based on the storage conditions too.

If you need to store them for more than two weeks then go for the green bell peppers that stay longer time than others and they are not fully matured peppers. The shelf life of cut peppers is short upto 5 days, if you implement the paper towel trick then it may last for one or two more days.

Do share this informative image of bell peppers’ shelf life and spread awareness about veggies like capsicum to consume the healthy food around you.

What to Look for When Buying Bell Peppers

One bad bell pepper in the bunch of bell peppers is not good it can ruin others too. So, you have to look for the longer storage ones from supermarkets or grocery stores,s or farmer’s markets. Tips and what to look for while purchasing the bell peppers are curated here:

Signs of Spoilage | How Do You Know If a Bell Pepper Is Bad?

Identifying the unseen signs on the bell peppers may tell if they had gone bad or not. Learn the following conditions or indications for knowing whether the bell pepper is spoiled or not:

When it was not stored in good conditions, it gets mold or rotten. If the mold growth started in small areas then cut off that area and use the rest of the pepper.

These are other types of signs that occur due to the loss of moisture. You may also find some sunken spots on the flesh that are okay to eat. If it is too soft then it’s time for crashing.

Sits in storage places for a longer time

If your whole peppers are sitting in the fridge for more than three weeks and if the chopped peppers for more than a week then take a call to eat or throw them out.

Changes in Appearance & Off Smell

If you get the odd smells and the texture is changed from the original state then get rid of it immediately.

All these signs are commonly identified by people. But the final decision to eat the mild spoilage ones is up to you. We suggest throwing them out for your good health.

Want to know some historical facts & benefits of bell peppers? then you must dive into the below pointers:

FAQs on How To Store Bell Peppers for Long Time

1. Do fresh bell peppers need to be refrigerated?

Yes, bell peppers need to be stored in the refrigerator. If they are chopped then you can leave them out for a few hours or overnight at room temperature.

2. Should Cut bell peppers be stored in the water?

Yes, you should store the cut bell peppers in water. The process of this storage is here, take the paper towel and wrap the cut pieces and keep the towel in a container then add about a half inch of cold water before closing. Want to know how long it can last? check the above modules.

Yes, wrinkled bell peppers are absolutely safe to consume as long as you haven’t found any other spoilage signs on them. The signs of bell pepper spoilage are discussed explicitly in this guide so refer to the module and get rid of the spoiled peppers.

We wish that you grabbed enough knowledge on how to store bell peppers to keep them fresh for longer time. If you need more tips on storing bell peppers and other information like the shelf life of vegetables such as How Long Do Onions Last, How Long Do Lentils Last, etc. click on the available links, or else visit our main pages with ease by tapping here CanFoodGoBad.Com